About Princess Ever After

We don’t just provide you with premium princess character entertainment; we create magic and cherished memories.  We spread joy and wonder throughout the Greater Denver Area by bringing childhood dreams to life at birthday parties, fundraisers, and special events.  We believe in imagination, miracles, magic, childhood, and memories.  This shapes everything we do from our obsession over ensuring every detail is perfect (kids do notice the details – often more than adults) to providing unmatched training to our exceptionally talented employees.

Princess Ever After Fast Facts

In November 2014 Princess Ever After began with a dream of creating a premium magical experience for Colorado.  Our original members witnessed firsthand other entertainment companies and found less than desirable experiences for customers and performers alike.  Forming Princess Ever After was a choice to stand up and make a change.  We were on a mission to do things differently – to do things right.  We felt a moral obligation to performers and customers.  In January of 2015 we launched publicly, and we’ve spent every day since then working to achieve our vision.

In our first year in business, we already made tidal waves in the character entertainment industry.  We set trends locally and around the globe.  By February 2016 we attracted massive international media attention appearing on shows like E! News, The Meredith Vieira Show, and RTL and in magazines like Cosmo, People, Seventeen, The New York Post, Daily Mail, Mashable, and many more both in the US and around the globe.  Others model themselves after us even though we’re the new kid on the block.  Though we’re often imitated, we’re never duplicated, and we continue to innovate and push ourselves and the industry to new heights.

Meet Derek and Sarah: Co-Owners of Princess Ever After 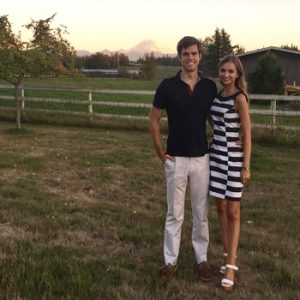 It’s rare to find a master of both business management and costume repairs, but Derek does it all.  Whether he’s wearing his operations hat, refining processes, catering to customer needs, or hand-stitching beads onto Cinderella’s gown, there’s one thing you’ll always find Derek doing: working.  We’re convinced he may secretly be an android that needs no breaks or sleep.  For Derek, there’s no project too grueling (he’ll finish it in under 5 hours), no process too complex (he’ll simply it for you), and no costume too tattered (he’ll make it look like new).  He won’t tell you this, but he also has more degrees than a thermometer. He holds an MBA from Clemson University, Master of Science in Finance and Risk Management from the University of Colorado, and a Bachelor’s in International Economics from Drew University.  Basically, he’s our “fairy godfather operations guru”.

Known internationally as a “Real Life Princess,” Sarah has more to her than looking like a human cartoon.  Sarah grew up performing for live audience and in recording studios, but as a Mensa member, she needed an outlet for both sides of the brain.  In middle school, she founded her first company developing websites for small businesses.  By age 21 Sarah had completed both a Bachelor of Science and Master of Science in Marketing, but she still needed an outlet for her creative side.  Princess performing finally allowed her to combine her love of marketing and the arts, and naturally looking like a cartoon character made the choice an even more obvious fit.  Today she enjoys helping to manage Princess Ever After, in addition to creating entertaining content as a social media influencer.